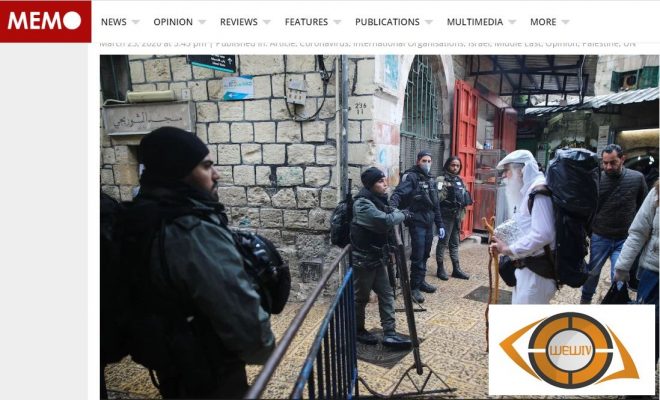 A report in the Middle East Monitor talking about the racism of Israel and its unfair policies towards the Palestinians in light of the danger of the Coruna virus outbreak, and the report stated:

Tens of thousands of Palestinians queue every morning at one of more than 140 fixed Israeli checkpoints scattered throughout the occupied West Bank. These permanent structures separate Palestinian cities, towns, and villages, as well as families from each other, and severely restrict the movement of Palestinians within their lands. During the past six years, their number increased by 41%.

The time spent waiting at the checkpoint equals 60 million hours each year, at an approximate cost of $ 274 million per year and 81 million liters of fuel ($ 135 million).

Moreover, Palestinians are now waking up to an increased risk of exposure to Corona virus – Covid 19 at the checkpoints, in addition to violating their basic human rights on a daily basis.

In places such as checkpoint 300 in Bethlehem, dozens of Palestinians are continuously crowded in supposedly single lanes. Moreover, fainting is common due to the lack of adequate ventilation.

However, the appalling conditions of Israeli military checkpoints in the West Bank represent only one of a number of health risks that Palestinians face as a direct result of the Israeli occupation. According to the Palestinian Addameer Organization for the Defense of Prisoners’ Rights, for example, there are currently 5,000 Palestinians (including 43 women and 180 children) being held in Israeli prisons. They are suffering in very poor conditions. Since 1967 a total of 67 Palestinians have died in Israeli prisons due to medical negligence.

About 700 prisoners need immediate medical care; and approximately 60% of the Palestinian prisoners held by Israel suffer from chronic diseases.

Palestinians living in Area C in the Occupied West Bank cannot access a permanent health center, and Area C constitutes about 61% of the West Bank and it is under full Israeli civil and security control. District C is also a home to about 300,000 Palestinians. They lack basic emergency and healthcare facilities.

However, Israeli settlers who live in 125 illegal settlements and 100 illegal outposts in Area C enjoy the most recent health care services and medical infrastructure.

The Israeli occupation exacerbates the possibility of the Corona virus spreading in the occupied West Bank and the Israeli government simply does not care. It is its responsibility as an occupying power under international law to provide health care to Palestinians living under its occupation.

Corona virus demonstrates once again Israel’s institutional racism, policies and practices that are unfair that have a noticeable impact on Palestinian life.