The rubbery occupation law treats all Palestinians very harshly, while it turns to be very simple when it deals with punishments regarding crimes against Palestinians.

In this context, the Israeli public prosecution requested only 3-month Punishment in (audience service) as a punishment against an Israeli who executed a Palestinian youth Ahmad Manasrah 23-years-old for helping a wounded Palestinian man.

Despite the crime committed by the Israeli soldier, he was accused of causing death as a result of negligence, without being accused of opening fire.

According to the crime details, a traffic accident took place on march, 2019, where a car driven by Alaa Raydeh hit another car, near the town of Khader in Bethlehem area. The video went viral on social websites showed that Israeli soldiers were shooting fire while Palestinians were helping the wounded passengers. a Palestinian was heard saying in Hebrew language “no”.

The video scenes showed a direct relationship between the Israel soldiers fire and the injury of the passengers who were in a Palestinian car.

Despite the crime ended with a death of an innocent youth (Ahmad) by 6 bullets, the occupation public prosecution only imposed 3 months upon the solider in the audience service, without any other punishment.

Activists in human rights organizations, as well as relatives of Ahmad Manasrah, organized a protest outside the military court of Jaffa. 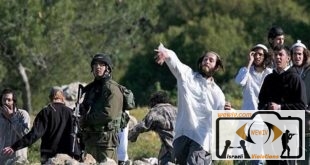