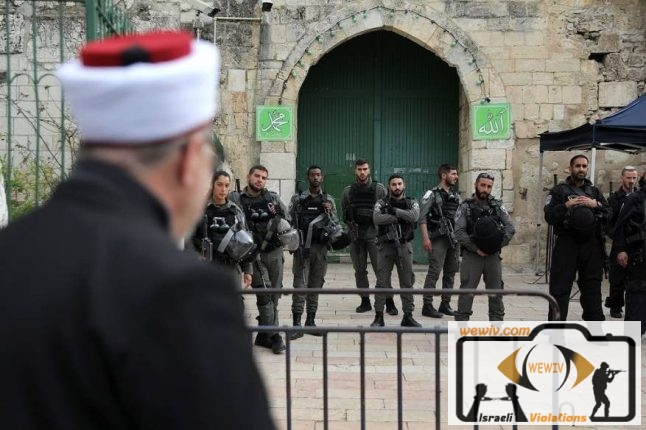 The monthly report on the violations of the Israeli occupation in occupied Jerusalem for April 2022 reported an increase in the rate of Israeli violations against the holy city.

(463) injuries were observed, most of which were in the upper areas of the body, which led to fractures and internal bleeding, and some lost their eyes due to direct injuries in the eye area.

During April, the report pointed out (7,274 settlers) stormed into the courtyards of the blessed Al-Aqsa Mosque, under strict protection by the occupation special forces, and thus witnessing an increase of nearly double compared to April of 2021, when 3,616 settlers stormed there at the time.

The occupation police issued restrictions on the access of Christians to the Church of the Holy Sepulcher in occupied Jerusalem, and reduced the number of people celebrating the Saturday of Light on the eve of Easter Sunday, in contravention of the most basic human rights and freedom of worship, and set up checkpoints in the streets of the Christian Quarter and the roads leading to the Church of the Holy Sepulcher, and prevented access to and inside the church. They also assaulted dozens of revelers on the Saturday of Light by beating and pushing.

The report observed about (894) arrests of citizens in Jerusalem governorate, and it is clear that there is an increase in the frequency of arrests during April 2022, 3 times more than the arrests that took place during April of 2021.

At the beginning of April, the Israeli occupation forces renewed the closure of 28 active Palestinian institutions, associations and organizations in the occupied city of Jerusalem.

Including the Orient House, the Prisoner’s Club, and other Palestinian institutions in the city.

Last April, the so-called “District Planning and Building Committee” of the occupation approved three large settlement projects south of occupied Jerusalem, including building (600 settlement units) on the lands of Al-Walaja and Beit Safafa, and expanding the industrial zone on the outskirts of Bethlehem.

The occupation authorities renewed a decision concerning the Governor of Jerusalem, “Adnan Ghaith”, to prevent him from entering the West Bank, after they arrested him from his home in Silwan town, south of Al-Aqsa Mosque. He had been subjected to dozens of arrests and summonses since taking office in August 2018. The occupation puts him under house arrest in his place of residence in Silwan, and prevents him from communicating with dozens of Palestinian figures.