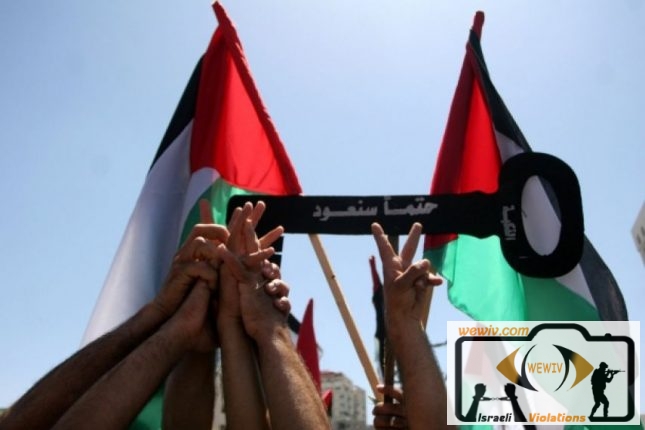 Zionist gangs, led by the Haganah during the 1948 war, staged the largest genocide after World War II, forcing an estimated 800,000 refugees from their homes out of 1.4 million Palestinians. These gangs succeeded in displacing the Palestinian people through terrorism, intimidation and direct expulsion. This is what the study of “Benni Morris”, the most famous of the Zionist military historians, focused on. Not only that, according to Dalet’s plan, which was revealed in “Alin Pappe’s” study in what he called “Ethnic Cleansing of the Palestinians”, Zionist gangs aiming to empty Palestinian land of its inhabitants in order to facilitate the process of colonization of the land by Zionist settlers immigrating from Western countries. And in confirmation of this plan, and in the memoirs of the Haganah, the officer in charge of the siege of the city of Lod, after the withdrawal of the Arab armies, refused to invade the city because of the large number of Arab citizens who s were there, and entered the city only after having obtained the prior agreement of “Ben-Gurion” himself, who authorized the implementation of the “Dalet” plan. This happened at dawn when Zionist gangs forcibly summoned the city’s youth and women and executed more than 90 Palestinians in the square in front of the city’s mosque, which drove the townspeople to take refuge. In the same context, the Deir Yassin massacre, which claimed the lives of more than 280 Palestinian civilians, men, women, the elderly and children, was only part of the “Dalet” plan, since the massacre was aimed at terrorize the Palestinian villages surrounding Jerusalem in order to expel the inhabitants from their villages and homes. According to the confessions of the leader of the terrorist organization “Lekhi” who carried out the attack on Deir Yassin, the massacre would not have achieved its objectives if it had not been for the killing of civilians, the mutilation and the cremation of corpses and the spreading of rumors about the massacre.
74 years after the Nakba, the establishment of the occupying state and the murder of tens of thousands of Palestinians and the expulsion of hundreds of thousands of them from their homes, the Israeli occupation forces continue on “the path of the Nakba” against the Palestinian people. It is as if the policies of ethnic cleansing, killing and land grabbing are part of the Zionist colonial identity. The occupation state continues to kill Palestinian civilians, arrest children and torture them in its prisons, just as it happened with the detained child Ahmed Manasra, and killing women, just like herds settlers when they killed Aisha Al-Rabi at the Zaatara checkpoint. The number of Palestinian prisoners and detainees in occupation prisons until the end of January 2021 reached approximately (4,500), including (37) female prisoners; While the number of children and minors detained in occupation prisons reached approximately (140) children, and the number of administrative detainees reached approximately (450) detainees; The case of prisoner Ghassan Zawahra, whose brother was martyred and whose administrative detention was prolonged for more than 7 intermittent years, was only a case of witnessing the tyranny of the occupation and its continuous violations of the four Geneva Conventions. According to the Palestinian Central Bureau of Statistics, more than 100,000 Palestinians have been martyred since the Nakba so far, and around one million Palestinians have been captured since 1967. Data from the United Nations Office for the Coordination of Humanitarian Affairs indicate that more than 110,000 Palestinians have been displaced inside the Occupied Palestinian Territory over the past decade. Statistics in the West Bank estimate that 900 Palestinians were displaced in 2019 following the demolition or confiscation of their homes, and the occupation authorities forced more than 400 citizens to demolish their homes on their own. On the other hand, Jerusalem is subject to an ongoing series of processes of Judaization and racial discrimination, and Human Rights Watch estimates that there are approximately 90,000 Palestinians in East Jerusalem currently living in buildings threatened with demolition.
As a result, the Nakba continues and the Palestinian people still experience it every day. The image of the Nakba dominates military checkpoints; the image of the Nakba is embodied in the expansion of settlements and the engulfment of Palestinian land; the image of the Nakba shines on the forehead of journalist Shireen Abu Aqleh, murdered by the occupying forces in the Jenin camp; the image of the Nakba is reflected in the burning of the Dawabsheh family; the image of the Nakba is represented in the apartheid regime imposed on the Palestinian people. The image of the Nakba will remain in the imagination of the Palestinians in the refugee camps, in the Jenin camp, in Dheisheh, Balata, Nuseirat, Yarmouk, Ain Al-Hilweh, Sabra and Shatila. Every day at dawn, Palestinians wake up with a new image of the Nakba. It is Palestine, Palestine the Nakba or the Nakba being Palestine. The difference here is not important, but the most important thing is that after 74 years, Palestine is still resisting, steadfast, and waiting for freedom.