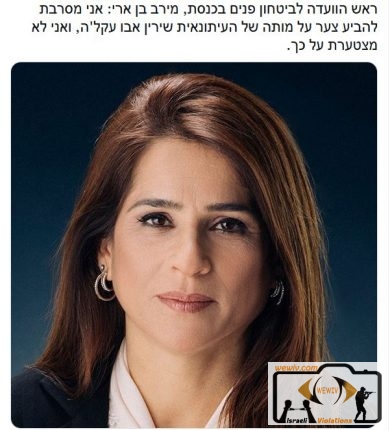 In a statement issued by an elected representative that belongs to the “Yesh Atid party”, which is led by the Israeli foreign minister

Israeli Knesset Member and chief of the Internal Security Committee (Merav Ben Ari) said that she does not feel sorry for the killing of Al-Jazeera correspondent in the Palestinian territories, Shireen Abu Aqleh, in Jenin camp. Ben Ari’s comments were in an interview with the Israeli channel “12”, yesterday evening, Saturday, on the “Meet the Press” program.

When a journalist working for Channel 12 published Ben Ari’s comments on his Twitter account, her position was supported by a large number of commentators.

This confirms that there is an extremist tendency leading Israeli society, headed by members of the Knesset and the political elites that govern the occupying state.

In this video you will see MK @Meravbenari from the Yesh Atid party, simply refusing to say she is sorry for the death of #ShireenAbuAqla. Ben Ari is considered part of the heart of Israel's political center. We moved quickly from excuses to legitimization of Shireen's killing. pic.twitter.com/FuAQT8DvMF