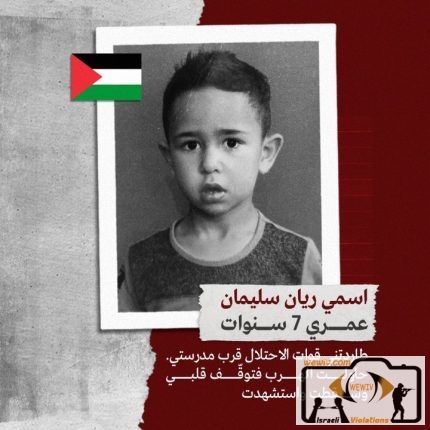 Israeli occupying forces still violate the international humanitarian law through targeting Palestinian children. The International Movement for Defending Children in Palestine documented that 29 children were martyred by the bullets of the Israeli occupying forces in the West Bank, including the East Jerusalem, since the beginning of this year till this days, 10 of them from Jenin. It reported that all of them were killed by Israeli bullets which hit the upper parts of their bodies, which means that the occupying forces opened fire toward them with the intention of murder.

The International Movement for Defending Children said that “the data collected in the field state that the Israeli occupying forces target the upper parts of bodies when they open fire toward Palestinian children, with the aim of kill or even causing permanent disability, and that using excessive force is the rule”.

The “International movement” reiterated that as long as there is no accountability for the Israeli occupation forces for their crimes against Palestinian children, they will continue to target them, which requires the international community to take urgent measures in order to punish all the Israeli perpetrators of crimes who kill or cause permanent disabilities, in direct violation of international law.

The “International Movement” said that the children who were martyred and were documented since this year are the following: