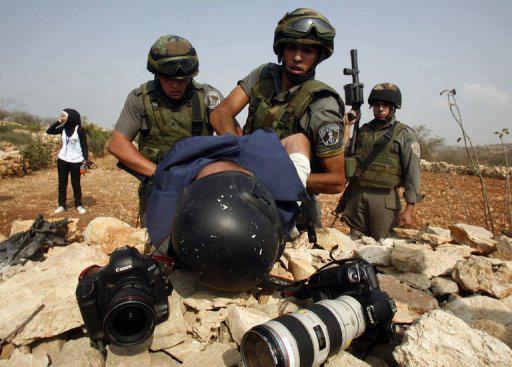 4-9-2015 –IOF assaulted the correspondent of Palestine Official TV Ali Dar and detained him with three of his collogues and prevented them from covering events in the town of Nabi Saleh.

5-9-2015 – IOF prevented a number of journalists from covering a peaceful protest in the town of Jabaa near Bethlehem.

10-9-2015 – Israeli forces renewed the administrative detention of the journalist Nedal Abu Aker for the third time.

10-9-2015 – IOF detained Palestine TV staff who wanted to report on the town of Orenat.

13-9-2015 – Israeli police ASSAULTED 10 JOURNALISTS during the coverage to riots in al-Aqsa.

14-9-2015 – Israeli police assaulted the cameraman of Kiopress Mustafa Yaser and detained him.

29-9-2015 – Israeli soldiers shot worker of al-Yamama radio in Hebron who suffered suffocation injuries, during his coverage to the tensions in the city.