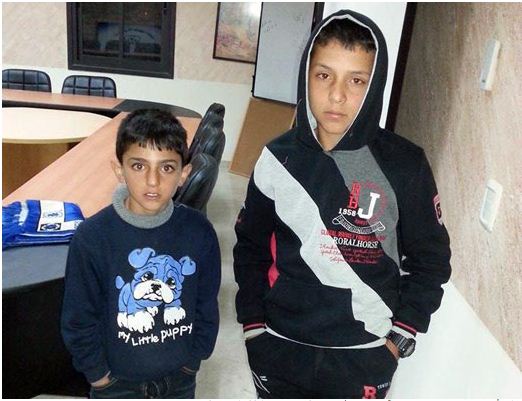 IOF violently arrest two young boys (8 and 12), interrogate and hold them for hours

B’Tselem:
On 24 November 2015, Israeli security forces arrested two minors – aged eight and 12 – from the town of Beit Ummar, and took them in for
interrogation. Khatab Abu Mariyah, 12, was arrested on the street at around 3:00 P.M. His parents were not informed of the arrest nor given the chance to be present during his interrogation. Eight-year-old Yusef ‘Alameh is four years younger than the age of criminal responsibility. He was arrested at his parents’ home at around 6:30 P.M., in violation of the law and without parental accompaniment, though his parents were at home. The two boys were held for hours and interrogated on suspicion of stone-throwing before being handed over to the Palestinian police at around 12:30 A.M.
On 26 November 2015, Khatab Abu Mariyah gave his testimony to B’Tselem field researcher Manal al-Ja’bri. He told her that he had been on the town’s main street with a group of other children and that when they saw soldiers approaching, they fled. Khatab ran toward some nearby orchards, where he was apprehended by plain-clothed security forces who had concealed themselves among the trees. They tied his hands in front of his body, blindfolded him and dragged him back toward the main road. Khatab says he resisted, and the security forces personnel kicked him and beat him with the butts of their rifles. He was held blindfolded and handcuffed for more than an hour, until a military jeep arrived. Khatab said he refused to get into the jeep and was beaten again. He was kept in the jeep for some time and then taken to the Etzion detention facility. There, still blindfolded and handcuffed, he was kept outside for about ten minutes despite the cold weather. He was then interrogated for about half an hour. His interrogator showed him a slingshot and asked him if it was his. Khatab says he denied the allegation. He was then taken to a military vehicle where he met eight-year-old Yusef ‘Alameh, and the two boys were taken to the military base in Etzion for questioning by soldiers.

Eight-year-old Yusef ‘Alameh was taken by soldiers from his home in Beit Ummar at around 6:30 P.M. Two hours earlier, at approximately 4:30 P.M., soldiers came to the ‘Alamehs’ house, searched it, and left without arresting anyone.

My husband went back to work. In the meantime, my son Yusef, 8, came home. I sent him to turn on the heating. At around 6:30 P.M., the soldiers came back. First they searched Nisreen’s house again. Then a soldier, who was probably the commander, asked me who was home, and I said nobody was home. The soldiers ordered me to stay outside and they went in. A few minutes later I saw a soldier dragging Yusef out by the shirt collar. The commander of the troops said to me: ‘You’re a liar. You said there was no one home’. I said Yusef was a little boy and I didn’t think he meant children that age. He said he was arresting Yusef and took him away. I tried to get Yusef away, but the soldiers kept me away from him. I phoned Ahmad and he arrived quickly and asked the soldiers to leave Yusef alone, but it didn’t do any good. They left, taking Yusef with them. I ran after them, screaming, begging that they release him. The soldiers ignored me and kept walking away with Yusef until they got to the main road. They ordered my husband and me to go back home. It was very cold and Yusef was shivering.

Yusef was taken away in the same military jeep that Khatab Abu Mariyah would be put into later. The testimony Yusef gave B’Tselem field researcher Manal al-Ja’bri indicates that while he was taken from the house to the jeep, he was beaten by at least one soldier. The two boys were taken to the Etzion military base where they were interrogated and held for hours before being handed over to the Palestinian Coordination and Liaison Office (DCO) at around 12:30 A.M.

They put me into a vehicle. Yusef was there with soldiers. They drove us to a military base, where the soldiers took me into a room. The interrogator and a female soldier were behind the desk and there were four other soldiers standing in the room. The interrogator asked me about kids who throw stones and I said I don’t know them. He asked about the slingshot and I said again that I didn’t know whose it was. The interrogator cursed me, my mother and my sisters. The female soldier pushed the chair until I fell. I was interrogated for about two hours, and then they took me out and started interrogating Yusef. His interrogation took about half an hour, and after that, they took me back to the interrogator who repeated his questions about the kids who throw stones. That went on for about an hour and then we were taken to the police station in Kiryat Arba. An officer with the Palestinian Police came there and took us to the Palestinian Police, and Yusef’s father picked us up from there.

Twelve-year-old Khatab Abu Mariyah was picked up on the street and held for more than nine hours, during which he was interrogated twice without parental accompaniment. Eight-year-old Yusef ‘Alameh was taken from his home, held for about six hours and also interrogated without parental accompaniment. The orchard where Khatab Abu Mariyah was apprehended and the ‘Alameh home are located near the town’s main street, where youths sometimes throw stones at military forces who enter the town.

On the night of the incident, B’Tselem contacted the spokesperson for the Central Command in order to find out where the children had been taken. The spokesperson confirmed the two minors were at the Etzion military base where they were being interrogated by soldiers, and said they would be handed over to the Palestinian DCO. The spokesperson also said that a soldier had been wounded by a stone thrown at him in Beit Ummar earlier that day. Only a few hours after B’Tselem approached the Central Command were the children handed over to the Palestinian DCO.

The conduct of the security forces in this case, as described above, is unlawful and unacceptable. Yet, surprisingly, it is backed up by the military’s legal advisors. When B’Tselem contacted the military’s Legal Adviser in Judea and Samaria after soldiers detained a five-year-old boy, the legal adviser, Col. Doron Barak replied that IDF soldiers strictly abide the law. He acknowledged that children under the age of criminal responsibility cannot be subjected to criminal measures such as arrest and indictment, but argued that if soldiers see a minor child under the age of criminal responsibility committing an offense that poses mortal danger, they may take preventative action. He wrote they must do so employing the required sensitivity and “fully preserving the child’s well-being and maintaining to the utmost his dignity and needs as a minor”.

The age of criminal responsibility is 12, meaning that soldiers may not detain children under that age at all, nor interrogate them on criminal suspicions. Even in the case of minors over the age of 12, their age should be taken into consideration during arrest. Inside Israel, the law affords several protections for minors’ rights. While only some of these protections apply in the West Bank, the soldiers’ conduct in this case failed to meet even this minimal threshold.

The disregard shown by the soldiers to the basic protections afforded to minors and the violence they inflicted on them during the arrest are another example of cases previously documented by B’Tselem in which the military blatantly violates the rights of minors – with legal backing. On 21 December 2015, B’Tselem contacted the military’s Legal Adviser in Judea and Samaria in order to reiterate the gravity of arresting minors and have him address this incident.