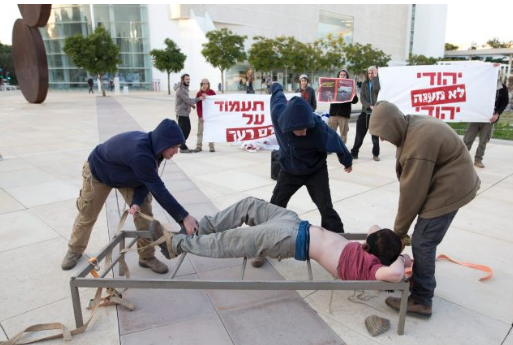 Despite Hundreds of Complaints of Shin Bet Torture, Israel Yet to Launch Single Criminal Investigation

P., a Palestinian imprisoned for 12 years for membership in Hamas and weapons dealing, says he was physically tortured during the Shin Bet interrogations that took place after his arrests.
In 2013, following his last interrogation, which he said involved severe beatings and other abuses, he filed a complaint with the department for investigating complaints against the Shin Bet, a Justice Ministry agency known by its Hebrew acronym Mivtan. Three years later, his lawyer was informed that his case had been closed. P. was shocked, but those familiar with Mivtan’s work could have predicted this result.
Mivtan, it turns out, has never launched a single criminal investigation against a Shin Bet agent, even though it has examined many hundreds of complaints. Haaretz has learned that the department employs only one investigator, meaning it’s unlikely that complaints can be thoroughly examined. In practice, then, the unit does not interfere with the Shin Bet’s work, even though complainants have reported harsh and prohibited forms of torture – including severe beatings and extensive sleep deprivation.

For many years, Mivtan was headed by a Shin Bet employee, leading to complaints about how effectively a Shin Bet agent could investigate complaints against his colleagues. Hearings on a petition to the High Court of Justice revealed that in 2001-2008 nearly 600 complaints had been submitted to the unit, and every single one of the cases had been closed.
As a result, in 2013, the Justice Ministry named Jana Mudzgurishvilly to head Mivtan, saying her appointment was meant to boost public confidence in the unit. The change at the top, however, hasn’t changed the results: None of the roughly 300 inquiries conducted since Mudzgurishvilly’s appointment have resulted in any criminal investigations, either. Mivtan does not reveal how many complaints it receives, only how many inquiries it conducts; however, attorney Efrat Bergman-Sapir of the Public Committee Against Torture in Israel said her organization had submitted more than 1,000 complaints since 2001.

P., in his complaint, described a series of abusive tactics used by the Shin Bet that are of dubious legality, even if P. had been a “ticking bomb” – whom it’s permitted to torture to extract urgent, lifesaving information – which he was not. He told of being bound in the “banana position,” with his back on a chair, his head on one side of the chair and his legs on the other. He said while being interrogated in this position he vomited and lost consciousness. Upon awakening he was slapped and punched. He also said he was suffocated by interrogators.

He filed his complaint in 2013, but, as noted, his case was recently closed. The prosecutor responsible for Mivtan wrote that P.’s interrogation had led to the uncovering of numerous weapons caches that prevented terror attacks, and that there was no evidence to back most of his claims of abuse. “I found that there was no fault in the interrogators’ judgment and that the use of special interrogation methods under the circumstances falls under the category of ‘necessary,’” the prosecutor wrote.
Mivtan, it turns out, does not take testimony from complainants who are in the midst of legal proceedings, on the grounds that it could unduly influence those proceedings, but this seriously undermines the ability to evaluate their complaints. The case of H., a Jewish Israeli arrested and questioned about involvement in Jewish terror last year, illustrates this.
H. underwent “necessary” interrogation, which allegedly included torture, for a month. He claims he was deprived of sleep and severely beaten. In the end, however, he was charged with assaulting a Palestinian – a far different allegation than that for which he was arrested. He is currently on trial, where he has claimed that he and the Palestinian had been quarreling.
Earlier this year H., working through attorney Sinaia Harizi-Moses of the Honenu organization, submitted a complaint to Mivtan about his alleged torture. After a short while, Harizi wrote to Mivtan asking why her client had not been called to give a statement. After two weeks in which she received no answer, Harizi-Moses wrote to Mivtan again. Two days later, Mudzgurishvilly responded that H.’s case had the status of “inquiry.”
Laconic responses
When Harizi-Moses asked what that meant, seeing how her client had not given testimony, Mudzgurishvilly said, “You have already been informed of the status, which is that of inquiry. … The exact stage within that status is derived, inter alia, from the progress of the legal proceedings against him.”
Harizi-Moses pressed on, demanding to know what the connection was between her client’s complaint and his trial, which are two different things. After a few days Mudzgurishvilly once again wrote, “The status of his case is ‘inquiry,’” adding that the suspension of the inquiry while H. is on trial is based on a Supreme Court ruling. H. has yet to be summoned by the unit to give a statement.
The Justice Ministry stated in response, “Every complaint submitted to Mivtan is examined by it thoroughly, and afterward by senior Justice Ministry officials before a decision is made on whether to launch an investigation against a Shin Bet investigator.
“Indeed, following preliminary inquiries over the past few years there was no decision to launch an investigation against any investigator, but this is only after each one of the complaints was checked, after the complainants submitted their testimony, after the Shin Bet investigators were asked to address the claims, and after all the material documenting the interrogation in real time was collected. However, examination of the complaints has periodically led to the system drawing various conclusions, or to disciplinary or administrative action against investigators.”
P.’s complaint, the ministry said, “was examined by Mivtan and afterward by a number of senior officials in the state prosecution, including the state prosecutor and the attorney general, who decided there were no grounds for launching a criminal investigation against his interrogators.”
As for H., the ministry said, “Mivtan does not conduct inquiries while criminal proceedings against the [complainant] are being conducted in court, particularly when there are arguments regarding the admissibility of a defendant’s confession in court, so as not to disrupt the court proceedings in the complainant’s case.”