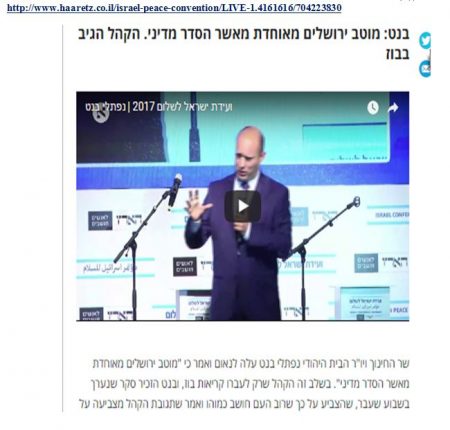 Neftali Bennett Prefers United Jerusalem Rather Than Political Accord

‘Better a United Jerusalem Than a Diplomatic Accord,’ Bennett Tells Israel Conference on Peace

Education Minister Naftali Bennett told Haaretz’s Israel Conference on Peace on Monday that he prefers a “united Jerusalem to a diplomatic accord,” and was met with jeers from the audience.

“In contrast to what you think, peace is reached not through concessions and ceding land, but from strength I want peace just as much as you, but I want a right wing peace.
“We’ve been condemned to living alongside the Palestinians. There’s no love lost between us, but they aren’t going anywhere and we aren’t going anywhere,” he said
Bennett reiterated his position on the future of the West Bank and Israel’s relations to the Palestinians, saying that “in Judea and Samaria there will be two areas – Area C where the goal is as much territory [as possible] with as few Palestinians. Those that remain – we’ll offer them citizenship. In areas A and B, there will be a Palestinian autonomy without security control,” he said.

Quoting Israel’s first prime minister, David Ben Gurion, Bennett said “it is not in the authority of the Jewish people to cede any part of the land of Israel, no one has the authority to give up that right.”

“There will be no Palestinian state after Gaza,” Bennett said, adding: “We need to learn from what happened in Gaza in 2014, the humanitarian situation there is deteriorating, we must act to prevent an additional round [of violence] there.”