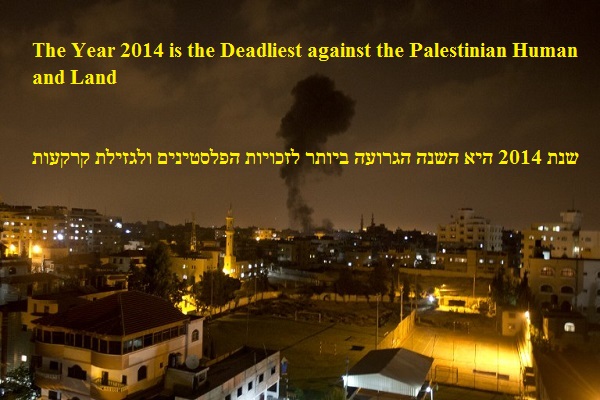 The year 2014 is the year of dividing al-Aqsa and the eviction of Muslims from Jerusalem. In the year 2014, al-Aqsa mosque was closed in the face of Muslim worshipers for the first time since 1967, where Israel allowed only extremist Jews to worship in the city. Many raids have been continued by MKs and other extremist Israeli religious parties leaders.

• Israeli authorities continue to violate the rights of Bedouin communities in the Jordan Valley and east Jerusalem (12500 inhabitants), for the purpose of uprooting them from the place of their homes and therefore gathering them in a spot of 300 acres. This comes in line with the Judaization project named as “E1”.

• In the town of Silwan, the colonialist attacks are being tightened by the Zionist organizations which confiscated 6 buildings consisting of 38 apartments in the area of Wadi Hilwa.

• Israeli occupation forces are changing their military posts into settlements while announcing new land confiscations in favor of those settlements.

• Israeli authorities announced new 6 colonial road construction 6 plans, for the purpose of connecting the Israeli settlements while disjoining the Palestinian cities and towns in the West Bank and changing them into isolated places.

• The total Palestinian land confiscations and announced by Israeli is 13,433 acres, an increase of 6% compared to 2013. The actions of burning trees and sabotages have increase, where as more than 25,000 olive trees were burned by Israelis.

• Israeli forces destroyed more than 4400 acres, of which more then 200 acres were confiscated in favor of settlements, alongside damaging 64 water wells.

• The West Bank and Jerusalem are still suffering from closures and military checkpoints which reached more than 485 checkpoints. The facilities and residential places threatened to be demolished are 700, an increase of 3% compared to the last year.