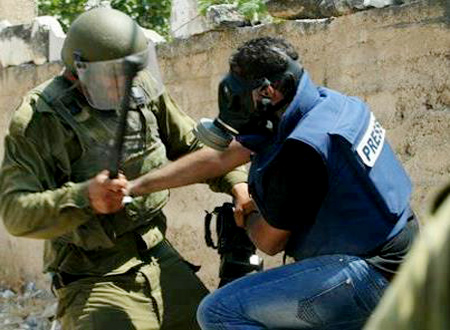 Palestinian Journalists Syndicate: Deliberate targeting of journalists committed daily by decision of the political level in the occupying country

in the occupied city of Jerusalem, and all journalists in occupied Palestine.

The syndicate, in a statement, said that the deliberate targeting of journalists is committed by a decision of the political level

in the occupying country and its extreme right-wing government.

The Syndicate also said: A number of Palestinian journalists were injured by the occupation army in Al-Aqsa Mosque, and they are:

The Palestinian Journalists Syndicate confirmed that:

it is proceeding to prosecute and hold accountable the perpetrators of crimes against Palestinian journalists.